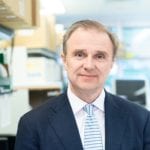 Laurence joined Ziopharm Oncology as chief executive officer in 2015 after Ziopharm and Intrexon Corporation together licensed technology for a non-viral approach for genetically modifying T cells from MD Anderson Cancer and the University of Minnesota. This technology is designed to reduce the cost and complexity of genetically modified T cells. Prior to joining Ziopharm, Laurence was a tenured Professor at MD Anderson with joint appointments in the Division of Pediatrics and Department of Immunology. There, he served as Section Chief of Cell Therapy at the Children’s Cancer Hospital and helped lead scientific efforts to develop new treatment approaches which pair genetic engineering with immunotherapies. He remains a visiting scientist at MD Anderson. Laurence has coauthored dozens of peer-reviewed journal articles, abstracts, and book chapters. He has initiated multiple trials under INDs infusing T cells and NK cells. He obtained his M.D. and Ph.D. degrees at Case Western Reserve University in Cleveland and he completed his training in Pediatric Oncology and Bone Marrow Transplantation at the Fred Hutchinson Cancer Research Center in Seattle.

We use cookies to ensure that we give you the best experience on our website. If you continue to use this site we will assume that you are happy with it.Ok